Pupils of CE2B, under the supervision of their English teacher, Munavvar Namdarkhan, made Christmas crackers in class. It was with much excitement that they discovered what it is about and the procedures to make original ones. 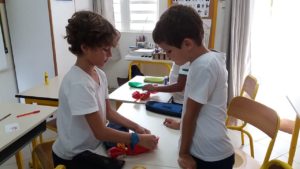 Prior to the day, they were all asked to come to school with a handful of sweets and chocolates as well as cardboard tubes. The other materials were provided by the school. The first part of the project consisted in learning a list of Christmas vocabulary including new words they would come across in the riddles they were to use in the crackers. They then coloured the images they would use to decorate it.

The second part involved making the crackers. Following a demonstration by the teacher, they started to do their own. Those with greater dexterity helped their friends who faced some difficulties specially in tying the knots. 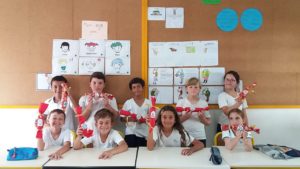 “We used cardboard tubes to make the Christmas crackers. We wrapped them in thin wrapping paper and tied one end. We put sweets, chocolates and a joke from the other end, before tying it too. We glued the images of Santa Claus, the snowman or a Christmas tree on it and we put it under the Christmas tree in class. We’ll take it home on the last day of school, before Christmas” said Arthur. Many of his friends said they would keep theirs under their own Christmas tree at home till Christmas. They want to surprise their family and share this special moment together. 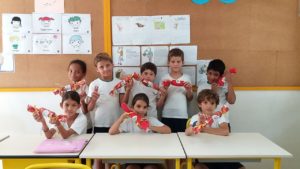