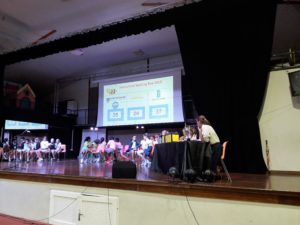 They competed in spelling words in English and French against students from Northfields, Martin’Ecole, and Lighthouse School. It was a tight contest, but in the end our students were victorious over the other schools. As well as a beautiful shiny trophy, we won Rs5,000 to spend on books for our library, courtesy of the sponsor for the night, Curtin Mauritius.

The champion students were :